Here it is, look at this pretty thing: 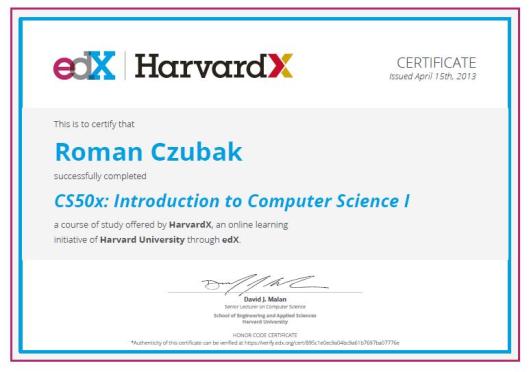 Isn’t it pretty? I am so proud of it… Nothing but some zeros and ones coming together to build this certificate, but for me it is so much more. A proof that I can, that I was smart enough to finish this course on par with Harvard students twice as young as me; that I managed my time good enough to make it; that I learned something new… I am grateful to EDX platform for this opportunity. I don’t know how many people will ever use your services, but here you have one old(er) fart which is jumping from joy 🙂

“Learning is not the same as study, nor the same as training. It is bigger than both. It is a cast of mind, a habit of life, a way of thinking about things, a way of growing” (from “The Age of Unreason” by Charles Handy).

I have been neglecting my blog for few last weeks because I am learning again. I took up a Computer Science course from Harvard, called CS50, which is offered free online here.

Some of the great universities got together and offered, free for anyone, anytime, anywhere, some of their courses. The one I am fighting through is, at least for me, very well done but it proved to be so challenging, that I don’t have time for pretty much anything, which annoys my wife immensely :), but I really enjoy it – the course I have chosen teaches programming and since this is a completely new area for me, I have to kick all my brain cells into high gear in order to complete assignments. Yes, the course is not “walk in the park, copy paste” kind of thing. It is difficult, it demands from you your own thinking, and it teaches. I hope that I will manage to finish it before the April 13 (deadline)… If not, then I hope that I will manage to finish it at all – gaining new skills, new perspective, creating new me in the process 🙂

That promised HarvardX certificate is also a nice carrot 🙂

I have recently read a few articles about education today (one of them here) and I have to admit that I do agree with most of them. I agree for example with an apparent fact that people today do not learn how to think, only learn (better said, memorize) how to solve tests. Schools, expensive as they are, spit out automatons without an idea how to think and solve problems. Those people know only where to find previous exams to use them as template to solve new, upcoming ones.

To add to the problem, so-called paid schools offer so-called education to just about anyone with enough money to afford tuition. True, this development comes as a consequence of skewed job market, but still education should show more constraint and responsibility with giving away degrees. Many of those people who attend such schools are people who really want to learn and gain something from the courses offered, but I am afraid majority counts just on a fancy paper and nothing else and those people should be taught differently or showed the door. In current process, value of the degree becomes diluted and many start thinking that if they can pay for a degree, why not have it done in shortest possible time? This is where we get our politicians with degrees based on copied work. In Europe such degrees are slowly becoming common place, just have a look at German and Austrian politicians.

People chasing degrees kill their value. Schools do not care what they churn, money is now all important. I am really glad that there are still universities in Europe offering free education, because those provide competition to rampant paid education (or basically, stores with pretty looking names and diplomas). It pains me to see such development as I know now that my MBA, although acquired through hard work, has lost in value because just about anyone can have it. Can buy it, if you want me to be frank, not earn it. This has a very profound influence on job market as a vicious spiral starts to develop: people hiring college graduates notice that graduates of cheaper ones are not offering any value and turn to more expensive ones with hope that there they may find good talent. And on it goes, as either students go for more expensive schools with hope of finding a job or schools rise prices in order to compete. Just as it is described in blog quoted above.

Twenty years ago Mr. Charles Handy wrote a book about change and in it he used some of the data published some years before his book came out. One of this data listed statistics about education of young people in 1988. In that OECD stats Great Britain placed 16th in the “…league table of young people in education after 16 years of age – above only Portugal and Spain.” (C. Handy, “The Age of Unreason” p. 29, Arrow Books, 1991). Now fast forward to today and see where the Britain, Spain and Portugal are economically. I wonder how Greece fared in those same statistics.

In one of my previous posts I said that jobs are out there, we just have to find them, as they are different to those we are (or were) used to. In the age of knowledge worker of Mr. Drucker, people need to have proper knowledge in order to participate in the job market. They need to be educated in right disciplines plus they must have human properties making them suitable for service jobs. If you will greatly simplify, you can cut the job market into those major categories: scientists and their helpers (those are people coming up with things); producers (including farmers and all workers producing things for us such as candy, bread, cars and airplanes); administration (all governmental jobs including Mr. President) and service sector. All of those have changed not only in their relative size – more percentage of people work in service then in all of them combined now – but also in demand all those jobs place on our intelligence, skills and training. That is why people who have chosen wrong subject of their studies years ago are now without work. In other words, you may be a master in coal excavation, but no one will employ you. Or you may be a bachelor in software development and you will get only a medium wage boring job, because there is a lot people like you out there.

It also so happens that jobs which are available demand high specialisation and great level of education, which (without offending anyone’s intelligence) not many of us can achieve. That is why there are a lot of educated people without work, and there is work available without people qualified enough to take it. That is one side of it. The other is that some of the people in positions of power given to them by their skills, jobs and ability, can abuse that power for their own gains. They can come up with schemes lesser people will not understand well enough to be able to stop them. Look at the crisis from few years ago and complicated financial instruments which were devised and abused by few, but not understood by many.

The third consequence is that whenever a financial crisis happens, we are so affected by it – service jobs are the first to get hurt, as people normally spending their income to get the service spend less because of the crisis. That starts a deadly spiral, and we all get hurt a lot more than it was the case when majority of the jobs were in manufacturing.

All I wrote above is not new. Ideas are coming from the book written 20 years ago, but as usual, no one listened. We know why things happen, but no one told us what to do about it. I don’t believe any great writer or thinker can change the way things are right now, no matter how right and revolutionary his ideas are going to be. For me, a non-economist, non-specialist person, obvious thing to do is that we need to keep the demand for services high. Secondly, we need to make sure that service providers are quick enough in adaptation, as services demanded today may be not needed tomorrow because of many reasons. Therefore education should go towards teaching not one, but a few skills including quick adaptation. Having enough of those skills could give us a cushion to fall onto in case of problems in our main area of specialisation. In other words, we would need to replace the age of specialisation with age of multi-specialisation. I have no idea if that would solve our problems, but here I count on scientists and their helpers – at least those ones with proper set of values. 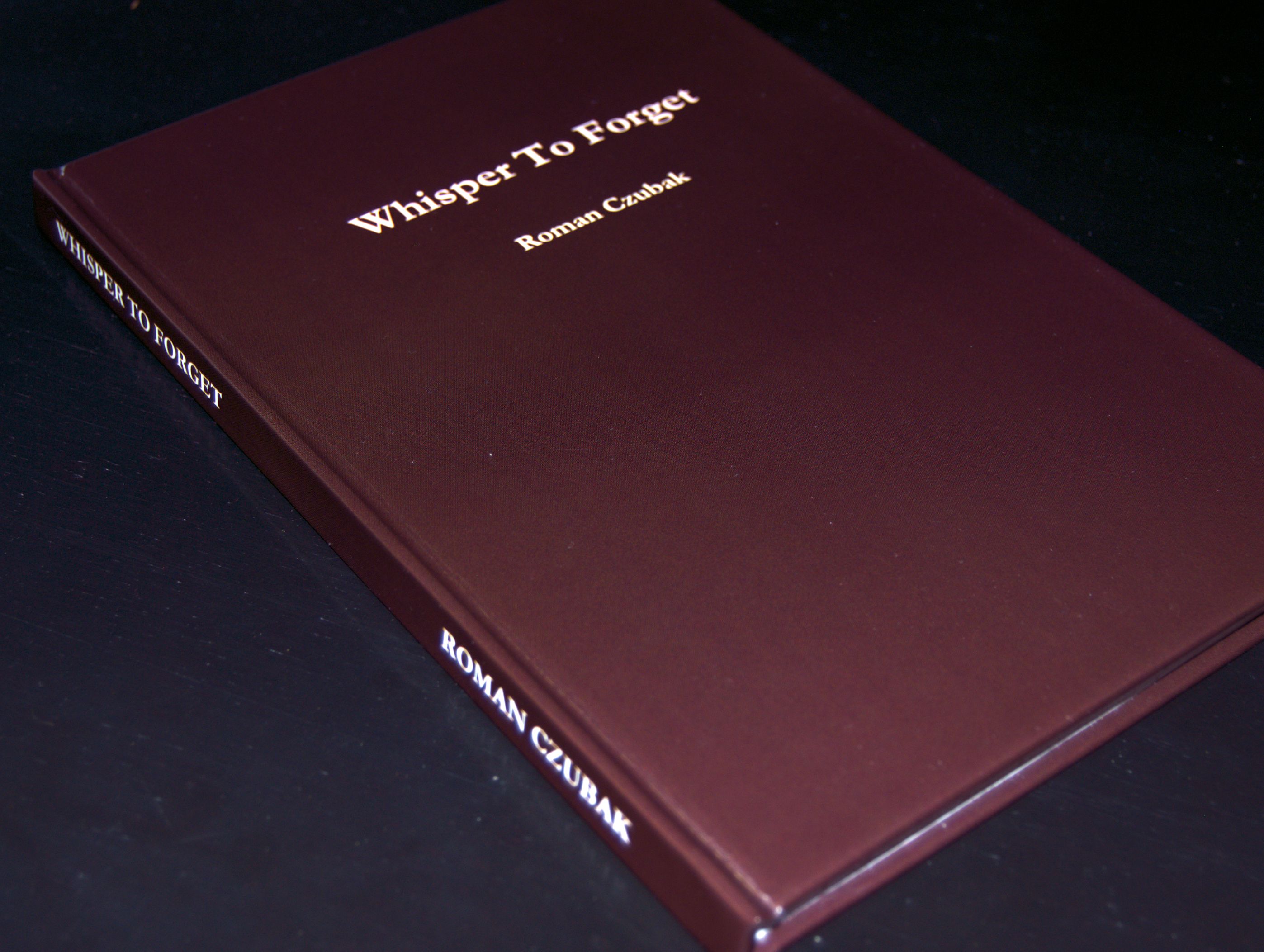